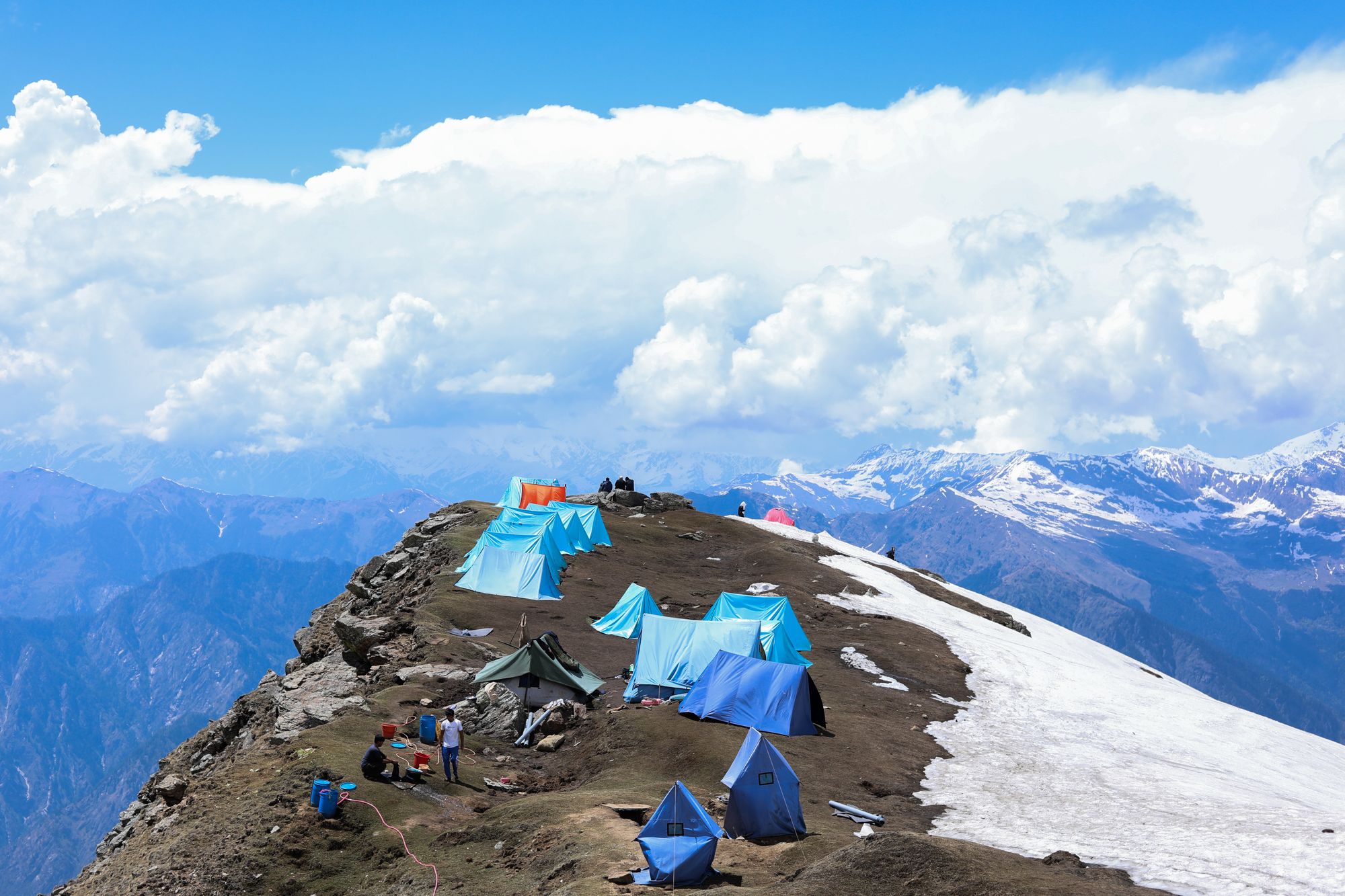 The Sar pass trek is a perfect trek for beginners. It is apt for those who want to experience various kinds of terrains. This trail offers forests, meadows, villages, and snow-covered mountains giving experiences to the trekkers. The trek starts from Kasol, which is a haven for backpackers around the globe and it attracts large weekend crowds, many of them are city youth, who are eager and interested in the Bohemian lifestyle. To cater to the tourists, the shops are well-stocked with foods, necessities, and luxuries as well.

Climb to the summit of Sar Pass at 13,799 ft. for stunning views of Snow- Capped mountains. There are plenty of staying options that are both pocket-friendly and high-end. You can choose from Israeli, Continental, Indian and Chinese Cuisines.

The trek from Kasol to Grahan is marked on through forests, following the Grahan Nalah. It starts from the centre of Kasol and continues to the left of Nalah. The trek is easy to navigate and is frequently used by villagers. The gradient is gentle; one can effortlessly cover the distance in a matter of hours.

One can be led to believe that is not the right path, but one must not believe it. Soon, the trees give grass and shrubs one can see some fields and can spot bright-colored tarpaulins as well. These are makeshift stalls with vendors who sell refreshments like tea, omelettes, and rhododendron syrup. Rhododendrons grow in forests that receive snowfall. The bright red flowers bloom in spring and are collected to make syrup. Petals can be eaten whole to feel refreshed and energised immediately and can be mixed with water to make refreshing drinks.

After a steep climb of an hour, look for a village for resting purposes, Grahan which is situated on the top of the hill. There is a satellite phone in the villages and one can also get network coverage on cell phones.

From the camping ground at Grahan, a trek goes north to climb up gently. Villagers often use this in the morning, this is the way to Min Thach. After walking, the view opens up and a guide can point you to Min Thach, Nagaru, and Sar Top on the mountains to the right. The trek also becomes steeper and it leads into the woods.

After some time you can enter into the dense forest, the thick canopy lets you in very little sunlight. The slope becomes steeper still and the path is still confusing in places. Toiling for an hour, the forest opens up to a grassy patch on a ridge. This is Min Thach, which means meadow in the local languages, much like “Kanda” or “Butwal” it is where the villagers bring their cattle to graze.

To the North- West across the horizon, there is Chanderkhani and other ranges. The ridge-line continues to the East and rises up to the cliff covered in snow which sits at the campsite of Nagaru. To the southeast of the ridge, lie forests. Some cleared space to pitch a tent is also available. One can camp for the night, the ridge will protect you from strong winds. A trench should be dug around tents so as to allow the natural drainage of water in event of rain, hail, or snow.

From Min Thach, as the crow flies, Nagaru seems not far but the route does not go straight up the ridgeline. It is always advisable to start early, for weather is generally favourable before noon and the snow becomes more slippery later into the day.

The ridge goes steeply up to left, to the cliffs, atop where Nagaru sits. The path to Nagaru goes up the ridge and is well-marked for hundred metres, after which the tree line ends and gives way to patches of grass and shrubs. The trekker would also need proper techniques- digging into snow with his toes and only once a firm foothold is established, putting another foot ahead in the same fashion. Down to the left, one can spot the campsites of Min Thach and the village of Grahan. To the south, it is a vast expanse of snow rolling up the hill.

Network coverage is also available in some spots. A water tap can be seen near the western edge of the cliff, but it may not be running. This is why water has to be carried from Min Thach. Camp must be established soon as the winds are very strong and temperatures dip very quickly after sunset.

It is very cold at night due to the wind chill factor and sometimes the winds are so strong that tents get blown away.

The climb to sar pass follows the ridgeline in a southward direction and it is steep in some stretches.  It is easier to walk on snow and the heavenly surroundings keep one’s spirits high. After climbing the hill  Nagaru, a higher hill that has to be climbed comes into view. After climbing for what seems like a long time, one reaches the top of the hill, and a sigh of relief and joy escapes as one sees the view ahead. Sar Pass derived its name from ‘sar’ which means ‘pond’, but the ‘sar’ is mostly frozen till late in summer. The pass is not the kind one could have in mind.

The view opens up eastward- the lofty peaks of Tosh valley are now visible. To the south extends the white blanket of snow, covered by snow-capped mountains- the highest of which seems to be within reach. It takes a couple of hours to summit and much distance has to be covered before the next camp.

The onward route moves away from high ground to the southeast following the contours of the hill.

With deep valleys on the left, one will have to walk carefully. After some time the path climbs up to a ridge running across. One can see a flag tied to a “Trishul” at the top. The slope is very steep in the last stretch and buried in the snow, you can also find a rope, which can be held which can be helped in climbing up. After a sharp drop, some hundred feet, a beautiful valley unfolds ahead.

The slide is the most fun and completely harmless as long as some precautions are taken- loose belongings are phones, goggles, etc. it should be kept together and not be dug in the snow even if you wish to.

The slide takes one as far as a kilometre to a gentle slope of the valley. After walking for some time, you can come across another slope in the valley, but it is not as steep as the first one. Depending on the snow conditions you can choose to slide again, for longer than a kilometre till you reach level ground. The third change in slope but it is steeper than the second comes not long after and can be covered by sliding again if there is snow. The slide will take you past snow-covered trees, through a valley that has now narrowed, and bring into the view to the left a lovely meadow. The grassland of Bun- Buni lies on the top of a ridge to the Northeast.

From Biskeri a steep path goes down to the left of the stream. The trek will end here, so one has to go through the plot to find the trek again which will lead into the dense forest. The path to the villages of Pulga goes to the left of the campsite. Soon after grassland comes fringed by trees which is one of the most beautiful places in the entire trek. The path continues through dry channels into woods, the descent becomes steep again.

From Tulga one crosses a bridge on river Parvati which has been dammed ahead for hydroelectric power project to reach the village of Burshane is the last village in the Parvati valley which is connected by a road and is used as the head for treks to Kheerganga, Mantalai Lake, Pin Parvati Pass and for trekking in Tosh valley. One can get buses or taxis to Kasol, Bhuntar and to other places from here.

How To Be Fit On Trek

You should be in good physical condition before the start of winter camp. You should be able to jog 4 km in 30 mins before starting the trekking. Your physical fitness is required for the successful completion of the trek. Train yourself to jog a distance of 4 km under 30 mins. It will make your lungs strong and will give you the ability to process less air for more work.