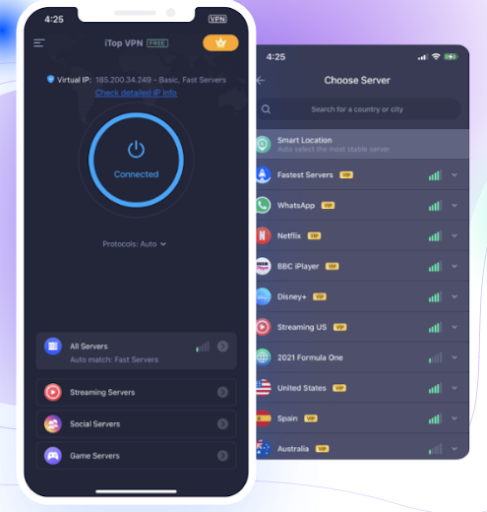 A stable VPN service is handy if you use your iOS device to access the internet. Several VPNs exist in the mobile app market, each bringing its best to outdo the competition. iTop VPN is one of the best utilities for iOS devices.

While this tool is famous as a VPN for Windows, it also has a version for iOS-run smartphones and tablets. With this VPN installed on your device, you will appreciate its functionality and versatility. Read on to learn more about iTop VPN for iOS.

You download the VPN from the website. You pick the version that is compatible with your device and proceed to download it. Optionally, you may visit Apple Store to download the app and check its reviews.

For starters, it is advisable to go for the free version. You heard that right; iTop has a free VPN, which is suitable for novice users, as they get a preview of its usability. Use it as a trial version before upgrading to premium plans later.

After installing the app, you go to your device settings to set the VPN, then launch it to enjoy its services.

Features of iTop VPN for iOS

The following are some of the noticeable attributes of iTop VPN for iOS devices.

Price is a critical factor when getting an app for your smartphone. iTop VPN is affordable, evident from its free plan and cheap premium packages. The premium packages go for $11.99 per month. You do not have to pay this amount when signing up, courtesy of iTop’s excellent discounts of up to 86%.

This app for iOS is highly adaptable, a feature you notice in various aspects. First, this VPN works with new and older iOS releases; you can use it on older devices and still get the best browsing experience.

Additionally, it is compatible with various operating systems. There is a version for Android devices that you can use if you have an Android-run phone. iTop is a VPN for PC and will support Windows and Mac operating systems.

Geo-restrictions affect our browsing experience as you cannot access some sites. With iTop VPN on your device, this problem will not bother you anymore. You gain access to more than 1800 VIP servers worldwide when you go premium.

This VPN allows you to access blocked gaming, streaming, and social platforms.

Most of us cannot resist using public Wi-Fi; it is free, after all. However, using public Wi-Fi exposes our devices to malware and hacking threats. iTop VPN will protect your device and data from such risks. Additionally, iTop ensures that your online presence remains private.

iTop VPN allows you to connect up to five devices at once. You do not need to sign up for an account for all the devices, making this utility economical.

iTop VPN is the best VPN in UAE and other locations for your iOS device. When installed, it ensures your all-around protection on the internet. Get this VPN and take advantage of its great discounts.