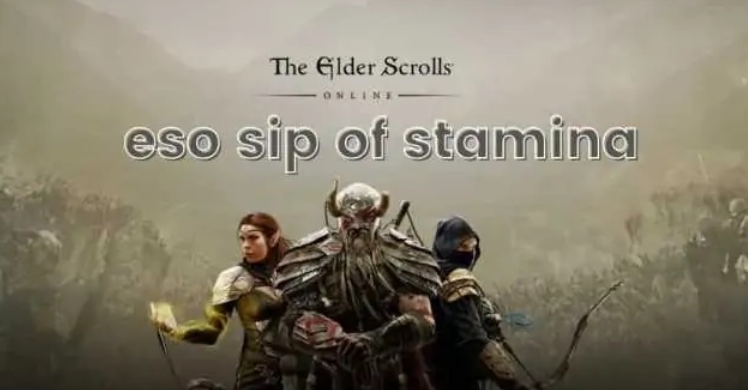 When it comes to crafting drinks for Elder Scrolls Online, the most common misconceptions are those concerning stamina, health, and ravaging stamina.

Different tutorials can be found on different websites, resulting in people making different drinks instead of stamina.

Is there a reason why people cannot make sip of stamina?

The making and crafting of that sip of stamina has raised a lot of questions. There is confusion among people. Because they follow the recipe to the letter, but still can’t make the stamina sip despite following it to the letter.

To explain why this happens, let’s take an example. In the quest Alchemist writ, a level 10 player goes. A level 10 player finds a Blessed Thistle and water with Columbine in it, according to the recipe that is well known on the internet.

Some players are furious and confused by this phenomenon, and they want a solution. The purpose of today’s article is to do exactly that. We will provide you with a solution for making that sip of stamina, that sip of ravaging stamina, and that sip of health.

ESOSip of Stamina: How Do You Make It?

An eso sip of stamina is replaced by another drink in the above example because the player makes a mistake.

It is possible to use clear water for a sip if your pot is level 10.

However, you need to use natural water to sip from a level 3 pot because clear water will not work.

Recipe of Eso Sip of Stamina

For alchemy crafting wits, sip of stamina is a crucial item that needs to be kept in mind.

In all cases, natural water is required to make sip of stamina. Here are some combinations you might want to try with other ingredients.

Instead of sipping stamina, the player did exactly what we described in the solution and made a Tincture instead.

What is the best way to make a sip of rage stamina?

A sip of ravage stamina can be obtained by mixing any of these ingredients with natural water.

You may end up with ravage health instead of ravage stamina if you use stinkhorn.

What is Elder Scrolls Online ESO?

In Tamriel, there is no proper leadership system and the place is in a state of constant chaos when the game takes place.

In the absence of a ruler, a place is unable to maintain its order. Tamriel is no exception. Provinces exist in Tamriel. Provinces must defend themselves independently.  A province may form an alliance with another province in order to defend its territory.

Apart from defending themselves, they expand their territory and take advantage of their alliances.

As for the Imperials, they form alliances with the Noble Tharn Family in order to bring Tamriel a suitable monarch. The Imperial ruler for Tamriel is brought to Tamriel with the help of Mannimarco.

Not only that, but there’s more. To make the Daedric Prince Molag Bal the sole ruler of all Tamriel’s territories, he has secretly worked with the Mannimarco. Sounds interesting, doesn’t it?

What is Your Role in the Game?

Through these thrilling events, the player takes on the role of an adventurer. It is Molag Bal who steals your soul. Bringing order and peace back to Tamriel requires fighting and regaining your soul.

It takes a long time for the player to explore the universe in the Elder Scrolls Online or ESO. There are a lot of things the player can do in the game. The purpose of this article is to discover how to craft sip of stamina, sip of health eso, and/or sip of ravage stamina.

How to Craft Eso Sip of Health? And other Potions?

The previous section of this article taught you how to craft eso sip of stamina with ease and without making mistakes.  Here are some other potions that will boost the energy of your character.

A potions or poison is made by alchemy, which is an art or craft.  You must be at the alchemist’s lab in order to craft any potion, whether it is sip of stamina, sip of ravage stamina, or that sip of health.

When do you need Eso Sip of  stamina for Health?

As a player in the game, the Eso Sip of Health plays a vital role in boosting health and progressing further.

The recipe for Eso Sip of  stamina for Health

The ingredients to craft the eso sip of health are likely to be available in your inventory.

Here are the ingredients you’ll need to make that sip of health:

You will proceed with the conversation if you have all the ingredients in your inventory. If an ingredient or two is missing, you will not be able to make the sip of health, and Danel will give you a location where you can get it.

In order to make Eso sip of health, you’ll need to make a little search at the location Danel gave you.

When you return to the Mages Guild after completing the eso sip of stamina health required by Danel, your alchemy certification will be complete.

Ingredients or “Reagents” that are most useful

The game contains many useful ingredients. Since most of them are only needed once, they are pretty useless. Some of them, however, are very valuable and important since they will be used in multiple potions and recipes.

In order to make recipes like sip of stamina, sip of ravage stamina, eso sip of heath, or other positions, the following reagents are necessary:

A fighter or warrior can use dragonthorn to increase their weapon damage during battles and fights, making it one of their most useful and helpful reagents.  In addition, it is used in the recipe for the sip of stamina.

A three-in-one recovery potion requires the first three reagents. These include the sip of health, the sip of ravage stamina, and the sip of stamina.

In terms of power and usefulness, Lady’s Smock is one of the most powerful ingredients for Mages. By using this reagent, you will be able to increase the power of your magic spells and make your enemies more vulnerable to them.

There are two rare abilities in the game that are shared by Namira’s Rot. Your speed will be increased and your enemies will be unable to see you.

You are more likely to strike your enemies when you use Water Hyacinth.

The most useless Reaganite is Emetic Russula, isn’t she?

Yes, of course. It is safe to say that the emetic russell is the most useless candidate. The alchemy skills are boosted by it, but that’s all it does. There are four negative effects in total, all of which are negative.